skip to main | skip to sidebar

Pirates of the Caribbean

One of the many interesting jobs we've had recently was designing the ships for Pirates of the Caribbean. We still get numerous requests for lines, detail drawings, etc of Johnny Depp's flagship Black Pearl. Of all of them, it is only truly functional vessel we designed for the show. But, it's fake too.

There are no detailed drawings of the whimsical 18th century, round bottom, wooden pyrate ship, because there is actually a 120' steel OSV (offshore supply vessel) inside of it. This is what we started with:

The idea was to take a fully functional, working ship and stuff it inside a Black Pearl shell. First we created the concept hull: 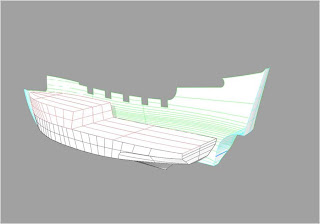 The Sunset was a 1970's era stout and well maintained little ship, carrying cargo in the western Caribbean...that is until we wrecked it. We made the new hull considerably bigger than the vessel in Pirates I, but still had to trim off the stern as shown in the pfoto above. Here's a picture of Sunset immediately after being hauled at Steiner Shipyard. Note the framing for the new watertight sponsons. 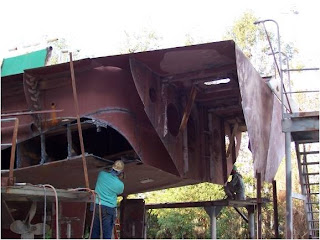 Steel framing was attached to the modified hull, and a cold molded shell fastened on top. This just after it rolled out of the building shed. Sunset's bottom with propellers, shafts, bearings and rudders sticks out the bottom. 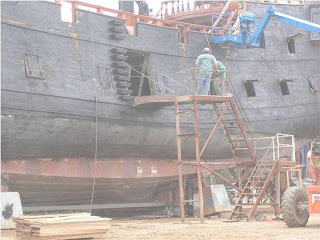 Check out the hydraulic crew door -- I think that's the coolest part of the boat...turns out it was the cheapest, easiest, safest way to transfer the equipment, food, stars and makeup onto the Pearl. Very 18th century.

I'm posting this final picture for all those who don't believe that we don't have detailed rigging plans for the vessel: 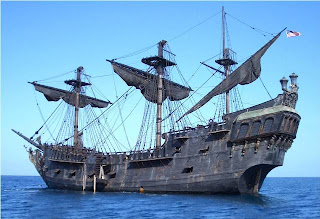 Look...there is no rig! It's truncated at the fighting tops...everything above there was CG. Well, if that part is CG, you may wonder (as I did) why didn't they animate the whole thing? One of the fascinating things about working on this project was to see how the studio determined what would be real and what would be animated...it depends how long it will be on film. If some part is going to be on film more than a few seconds, its still cheaper to build a full size thing then it is to create a virtual thing...I guess carpenters get paid less than animators.

Sunset/Black Pearl turned out pretty well, and as I wrote, fully functional. Immediately after it launched, it navigated 2000+ nautical miles from Bayou La Batre down to the Eastern Caribbean, then back up to the Bahamas. As far as I know it's now stored somewhere in Ensenada, Baja California.
_________________________
Cangarda update: I see there is an ongoing thread on the WoodenBoat design forum

His is a fascinating entry--I had no idea you worked on the Black Pearl--my children will be very impressed!

There are no detailed drawings of the whimsical 18th century but can i have detail drawings in the process of building the ship? I want an opportunity to learn from you.

I would be very glad to receive your drawings.

Thanks you so much!